The library bears two responsibilities: One is "the library of the university," which assists in teaching and promoting of academic affairs; and the other one is he public library whose function is to serve the community.

Floor plan of the Library

First floor, a single window for loan service is located near the front door of the library and the back door of the library is also the entrance for selfstudy room and general public's newspaper room. The Chinese and Western Books for the University are placed on the second floor. Self-study rooms for University students and audio- visual room are located on the third floor, and the meeting room for respective department is on the fourth floor. The basement is a Reading Room for the general public and children. 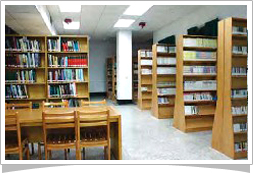 The library currently has kept the number of collections as following:

OUK students have to carry along the student ID card and registration receipt and apply for a library card to the circulation counter of the library. Each student is allowed to borrow 5 books and 2 overdue periodicals, valid for 4 weeks.