Laws are the ruling foundations of a democratic country. Politics is the basis in the operation of democracy and constitution. The significance of the concept of law-governed to democratic country is apparently a truth. In view of this, the carrying out of law education as to nurture the modern lawabiding citizens to obtain the concept of law and order is a major topic that the Taiwan society of developing democratic consciousness as well as the government must confront. However, colleges with department of law are very few in Southern Taiwan; department with combination of laws and politics is quite in demand. The opportunities and environments of learning laws and political science are apparently insufficient. Thus, in coordination with the impetus of the government, this department is established to provide a professional learning environment to people with aspirations on law and political fields. We are looking forward to nurturing more professionals with knowledge of both laws and political science. We also hope that through education, we can provide assistance to the government in the enhancement of the people's knowledge in laws and abiding practice.

The objective of this department is to cultivate professionals with both cultural literacy and accomplishments on laws and political science. The instruction shall emphasize equally on theories and actual practices. The curriculum emphasizes mainly on the professional course and links with general knowledge courses. With the complete training of this department, the students are expected not only to engage in the legal and political field of professions, but also to apply what they have learned in other fields of professions. 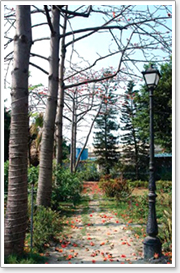 The Department is divided into two divisions: the divisions of laws and the divisions of political science.The effect is to blend the standard of laws with the realism of political science, as well as to emphasize the importance of the education of laws and political science. The study of political divisions is mainly on the courses relevant to the Six Codes; and the division of laws is mainly about laws. However, both groups shall at the same time emphasize the field of public laws, including the Administration, the Constitution, the Administrative Laws, the Official Election and Recall Law and Politics. The courses designed by the departmentare complete, innovative and forward-looking to satisfy the demands of students in the knowledge seeking, national examination and employments.

The Department is the sole department in the country that combines the study of laws and political.It is also the cradle for the public civil servants in acquiring legal and political education. After eight years of establishment, the Department had bred out over 400 alumni, with many of them serving prominently in the legal service and political field, a great contribution to the endeavor of the government in promoting the legal and political education. Nevertheless, in order to enhance the professional knowledge of students on laws and political science, the Department will be offering advanced classes such as "Master Program in Law" in the future to train the students to study law independently and to develop research ability. This scheme shall provide the alumni to have greater space of development and benefits more young students of Southern Taiwan who have aspirations toward the field of law and political science.